Graphic Design Students are Designing their Own Fashion Lines 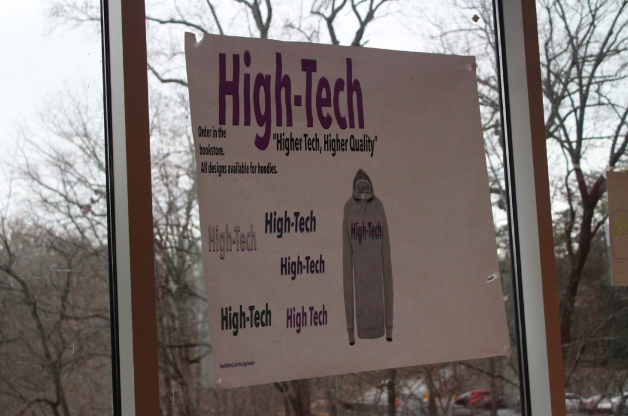 Advertising posters have covered the floor to ceiling windows.

Fashion is a creative outlet that individuals use to express themselves. It’s also a way the fashion savvy can turn a fashionable vision into a tangible reality.

That process of vision to reality will be on display in an upcoming talent show sponsored by the Warrior Fashion and Designz Club. The event will take place on March 30 at 4:30 pm in the school auditorium and will be under the direction of graphic design teacher Shirley Guiteau.

“The Warrior Fashion and Designz Club is the first of its kind at North Atlanta that isn’t related to doing any vigorous activity like sports, business or technically related, but rather a club where anyone and everyone is able to join,” said senior Morgan Daniel, the Fashion Club vice president. “It’s our hope that this becomes the kind of activity where all students can express themselves and learn to collaborate as they pursue a career in or around anything related to fashion.”

For months on end, students in the Guiteau-sponsored Fashion Club have been working in graphic design programs like Adobe Photoshop and IIlustrator. For this major class assignment, students have been tasked to come up with a clothing brand that incorporated their unique design vision. During the fashion show, the designers themselves – along with recruited student models – will vamp and vogue articles from the new clothing lines.

Guiteau mentioned that students are learning about the various specializations that graphic design has to offer. Usually, people are familiar with common graphic design products like business cards, logos and posters. However, when dealing with fashion, textile designs are used primarily for transferring designs directly on apparel. “It’s amazing to see what the students have produced,” she said.

Where clothing items are concerned, students have tended to gravitate toward t-shirts, sweatshirt hoodies and t-shirts. The names of the brands – or online shops – that students came up with reflect not just their personalities, but also design emphasis.

“It has been a very cool experience watching people express themselves through fashion,” said senior Elle Loeffler, Fashion Club president.

Junior Isaac Ashmore said his Offbrand line is an extension of who he is. “I’ve been working on this all semester,” he said.

Ashmore said he’s gone as far as wearing his line’s hoodie to school to build up enthusiasm. Ashmore said he’s inspired by objects he finds in his everyday life. “Every artist takes inspiration from their own personality and life,” he said.

One of the show’s student directors includes junior Shemari Billings. On the day of the event, his responsibilities will include setting up the stage, arranging seats, and offering stage direction to participants. “I don’t want to talk about all that’s going to happen now. You’ll have to come to the show to see,” he said.

All North Atlanta students exhibit fashion in one way or another. But for the lucky few in Guiteau’s class, fashion is not something shown. It’s something created from the ground up.