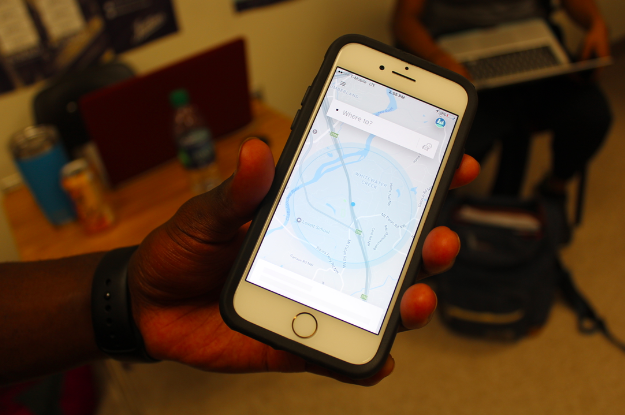 Student Jadin Knight is one of the many proponents of Uber.

There comes a time in everyone’s lives when taking rides from parents is not “cool” enough to become a regular thing. Or maybe your relatives simply can’t keep up with the amount of afterschool activities you’ve signed up for. That is why more and more high school students today are using Uber which, in its own way, is the first and probably most efficient mobile taxi. “I’d recommend it to anyone that doesn’t have a ride to go anywhere,” said sophomore Dante Bastien.

Uber is an American worldwide online transportation service that, like with UberBLACK, use its own employees to drive you around, or like with UberX, anyone with a driver’s license and a car can become a driver. Riders can use their Uber app to hail a driver and get a ride just like a normal taxi service, only this looks out for both the safety of the driver and the passenger. It protects private information, but the app connects both the driver and rider to make sure that the rider doesn’t get a fake ride and the driver doesn’t get a fake passenger. “I take an Uber usually three times a week to get home from Robotics.” said sophomore Zach Lloyd.

There have been a few problems with Uber, like with any major corporation. The driver’s pay varies from city to city, but it equates roughly around $11 per hour. With additional charges the drivers are responsible for like gas, car maintenance and taxes that cuts the pay to around $8, just barely above the minimum wage in Georgia. The Uber driver screenings have been proven flimsy as well, and a few drivers were known to have been hired were discovered with colorful criminal backgrounds later.

However, when it comes to a simple ride, Uber is the way more and more students go. It’s hassle-free, fast, reliable, and features friendly drivers who are usually just interested to make a quick buck. “I usually get really nice drivers that question me about school when all I want to do is my homework,” said Lloyd.

So enjoy riding Uber until the day you get the dream car of your own.