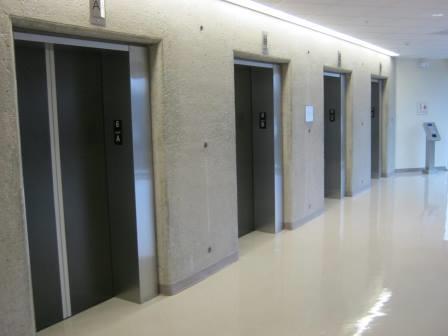 North Atlanta has roughly 1900 students. Typically, most upperclassmen drive to school each day and then park their vehicle in the parking deck. After, they walk down the stairs, then down the path, all the way to the school. High school is already tough, why not make it a little easier by making the deck elevators in service?

Shortly after the new North Atlanta building opened, a sign saying elevators are out of service appeared. Do the elevators actually not work? Or have the faculty put up signs so students will not use them? Rambunctious driving is one issue NAHS staff face, to them, another set of elevators to deal with may not be worth the fight.

Another issue in getting the elevators serviced is the issue of if they would make a difference in a student’s average day. “I would definitely want them to start working. Injured and handicapped people should not be limited to parking on the upper levels. Also, oftentimes students have a lot to carry, elevators would help take the weight off, said junior Asa Bolden.

However, there is still a significant case for not servicing them. Even if they did work, would student actually use them. “Oh, I forgot we even had elevators. They are definitely not necessary, even if we had them, they wouldn’t be used. If you have a problem with them not working, park on the lowest level, problem solved,” said sophomore Anna Pannell.

The parking deck is full of craziness and chaos with students flying in at 8:43 a.m. and leaving as soon as possible. It’s a jungle in there. Another significant factor that the elevators do not matter is that since the time spent in the deck is very minimal, a job that may take hours, is not worth saving a few minutes of convenience.

Elevators are a handful full of many pros and cons. Though it may help the injured, most likely students will break them again, causing an ongoing dilemma. Whether you’re for or against the elevators, for the time being, student will survive and overcome having no parking deck elevators.