Politics Club Talks It Out 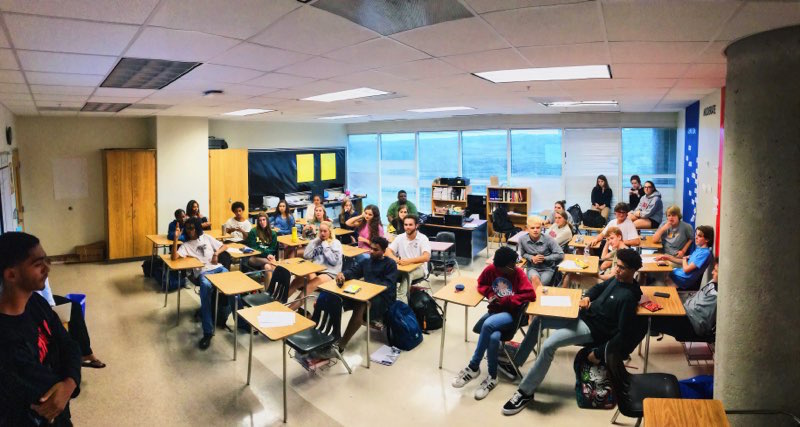 Political Participation: The North Atlanta Student Political Association discusses the current events and politics to inspire more students to be aware of the world around them and to be able to voice their opinions.

The North Atlanta Student Political Association (NASPA), formerly known as Politics Club, has rapidly become one of the most attended and beloved organizations North Atlanta has to offer. Week after week, students itch for Wednesday to come and once again make their way to the school’s weekly Student Political Association meetings. Considering all that NASPA has to offer, it’s no surprise that students just can’t get enough.

Senior founders Clarke Peoples and Sherwin McDonald describe their motivation in starting the organization as an effort to increase political and global awareness amongst the student body. For many, finding a place where they can safely express their opinions without fear of judgement is a difficult feat. Peoples and McDonald have experienced this struggle and hope to mold NASPA into an environment where all students can feel free to learn and discuss alongside others.

Contrary to popular belief, Politics Club is not simply a forum for senseless argument and confrontation, but rather an environment in which students are free to voice their opinions and grow by interacting with other students. Peoples and McDonald hope to provide an outlet for the school’s socially conscious and politically curious students. “We’re completely open to all students. Republicans, Democrats, and Independents alike, ” said the club ambassador, junior Ansley Booth.

NASPA aims to bring people with diverse backgrounds and varied political views together in order to educate each other and analyze differing points of view. The organization hopes to assemble a group of students who are always open and ready to learn and share. “We even encourage people who have no defined political position to come to each meeting because our insightful discussions can help mold their political views, or just teach them more about what’s going on in the world,” said Peoples.

A typical meeting will include a kick-off with a casual political meme, followed by a review of weekly political events, stand-out occurrences and even some fun news. Participants describe the meetings as both well-structured and often utterly eye-opening. Every student has an opportunity to participate in the discussion. “It is a great opportunity to become better at speaking in front of people and forming educated arguments,” said Peoples. “Of course if you are very interested in politics, it’s an awesome way to share your opinion and discuss anything you want to cover from the news.”
Politics club takes place in Mr. Reid’s room (8163) every Wednesday. Be sure to stop by and contribute to the conversation. The only thing NASPA is missing is you!