The Warrior Wire • May 31, 2019 • http://www.thewarriorwire.org/6124/ae/divine-royalty-north-atlanta-orchestras-spring-concert/ 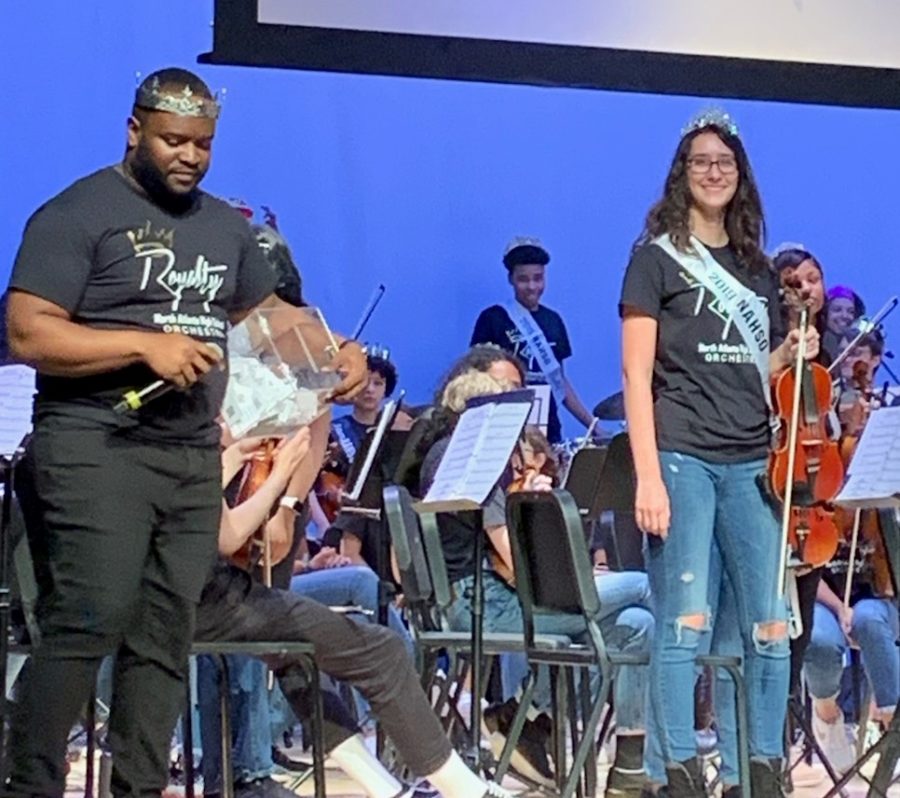 Senior Moment: Violinist Lila Ward was one of many orchestra seniors honored during the April 25 Spring Concert. She is shown on stage here with orchestra director Stephen Lawrence.

On April 25 the North Atlanta Orchestra put on a show dedicated to the seniors that have dedicated four years of their high school career to “divine” artistic performance with orchestra director Stephen Lawrence. Keeping with the elevated, regal theme, this spring’s performance was called “Royalty.” With performances from legends such as Michael Jackson, Aretha Franklin and even Beyonce, the tracklist was set to make a show fit for kings and queens.

The show began with a performance from Michael Jackson — accompanied by dancers from the dance department — followed by a tribute to the popular TV show “Game of Thrones.” The orchestra then put on a show-stopping performance by ‘Beyonce’ and her backup singers. Finally, the show ended with a final tribute to Freddie Mercury and the band Queen.

Junior Sydney Jones was the face behind the performance by Michael Jackson’s ‘Remember the Time.’ “I loved my costume and having backup dancers,” said Jones. “Imitating the King of Pop was definitely an iconic moment for me.”

As far as work was involved, the orchestra is no stranger to putting on show-stopping performances. “Every year the orchestra goes all out for the spring concert, from decorations to skits and performances inclusive of all departments,” said Jones. “We work very hard on costumes and we incorporate help from visual arts, as well as the chorus, dance and band.”

Senior Devon Gates played the role of Aretha Franklin during the performance of “Respect.” “My favorite part of the concert was definitely having to get into the vocal character of Aretha Franklin. As you would imagine, she’s a very hard act to recreate,” said Gates. “Everyone works so hard on the set and it’s a fun concert to perform in.”

The concert ended with a speech from Lawrence about the achievements produced and spearheaded by the senior class, as well as a standing ovation from the audience. While the spring concert may be over, this year’s performance left a memorable mark on the audience and a crown on the head of every senior on stage.