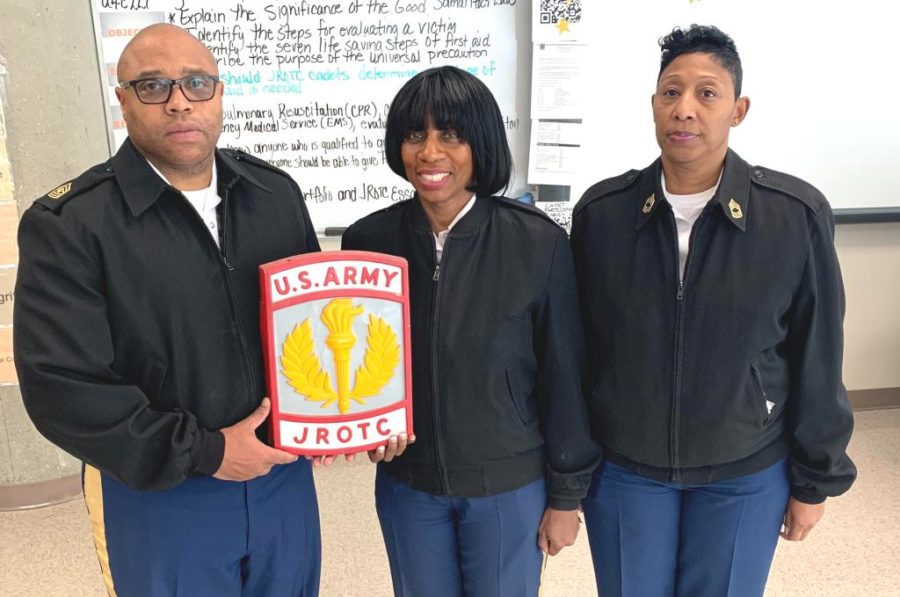 The U.S. Army Junior Reserve Officer Training Corps (JROTC) is a program offered at North Atlanta and it is based on the core tenets of citizenship, leadership, character development and community service. The main goal of the program is to prepare students for life after high school and help them to become better citizens.

At North Atlanta, JROTC is taught by Lieutenant Colonel Lynnette Minnick, Master Sergeant Tonya Benton and Sergeant Major Corey Jackson. The JROTC teachers are teaching life lessons learned from their experience while serving in the military.  Collectively they have more than 60 years of experience. Minnick spent 21 years in the military and her longest stints were at the Pentagon in Washington. D.C., and at Fort McPherson in Atlanta. After retiring, she decided she wanted to inspire young people and teach JROTC. “I wanted to make an impact on the students, to help them be better citizens and leaders,” she said.

The program fosters a positive environment where all students are encouraged to become the future leaders of tomorrow. The program seeks to instill self-confidence, teamwork, responsibility and a sense of service to their community. Another long-standing goal is to see students successfully transition from high school to college and career. Students must maintain an acceptable standard of academic performance in all their classes in order to participate in JROTC extra-curricular activities.

Students attend JROTC class as a part of their regular schedule and participate in extracurricular JROTC activities after school.  JROTC sharpens their discipline and confidence through participating on teams, activities and being promoted. There are 189 cadets and their student leader is the Battalion Commander William Winslade. “It’s a real honor for me to have this role and our goal is really to be the best possible JROTC unit in the district if not the state,” Winslade said.

The school usually sends about 1 percent of the students who take JROTC directly into the military, but many more go into ROTC in college and the military afterward. Starting as a LET 1, cadets can earn points and work their way toward the top. LET stands for Leadership Education in Training, and everyone goes into the program as a LET 1 and as cadets continue the program they can move up all the way to become a LET 4 or receive other leadership positions by participating in their community and showing effort.

If you have ever seen a classmate or a fellow student in the hallways with a JROTC uniform you might have noticed all of the chords, pins, and ribbons they have attached to their uniform. Ribbons and colorful stripes across the left chest, can be acquired by doing a number of things, like volunteering and community service hours. Pins, usually located underneath ribbons are mostly achieved by excelling in an activity. Chords, those long colorful ropes that hang around the shoulder, are the hardest to obtain and they are earned by those who serve at the highest levels.

There are extracurricular activities that JROTC competes in as well. This includes the Rifle Team, the Color Guard, Honor Guard and the Drill Team. The main activity students participate in are marching squads, where teams goes to a competition and perform a choreographed march. The color guard is a four-person team that marches with flags and rifles. The color guard is often seen during the national anthem, two people holding flags, one the American flag, and two people holding rifles. The honor guard is a performance with swords, and the drill team is a large group of JROTC cadets who march in formation.

They represent our school’s best and brightest and those in the program are marching toward success. They are North Atlanta’s JROTC.