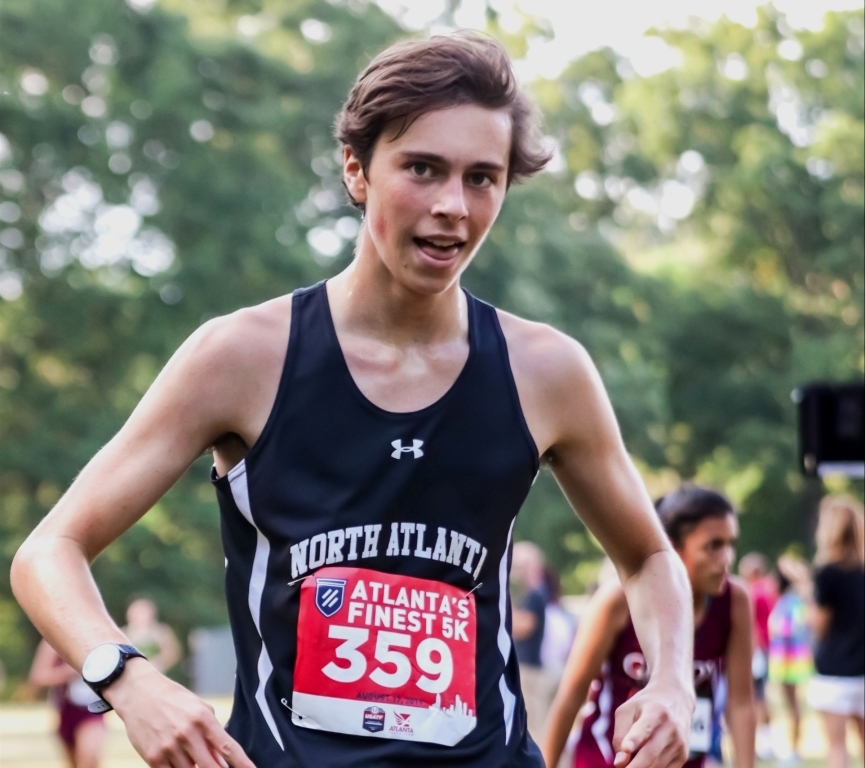 On Your Mark, Get Set, Go: Junior Andrew Churchill, one of the top runners on North Atlanta's 2019 varsity cross country team, finishes within the top 10 at region race, helping the Warriors edge out their competition.

For the first time in four years, the North Atlanta cross country team is advancing to the state-wide cross country meet. This was prompted by the team’s phenomenal performance at the 7-AAAAAA Region Championship meet. Since being upgraded from 5A to 6A in the 2016-17 school year, the Warriors have been unable to advance out of their new region. This is mainly due to the fact that they have to battle with eight of the best teams in Georgia for just four spots in the state meet. After narrowly missing state-championships three years ago, both the boys and girls teams have finished at or near the bottom of the region the last two seasons. However, this year was a different story. Fueled by their show-out season and an underdog spirit, the Warriors were ready to wreak havoc this time around in regionals.

After arriving at Webb Bridge Park in Alpharetta at 9:30 a.m. on a cold rainy Tuesday morning, the Warriors were quick to start working. The team jogged the course and finished before the rest of the competition even arrived. The clouds began to part and the sky opened up as the time approached noon. The stakes began to rise as race time loomed closer and closer. Finally, at 1:45 p.m. it was time to race. The gun fired, and all 63 runners from 9 different teams took off, with hopes of keeping their season alive.

Pope, Cambridge, and Alpharetta were heavy favorites to advance to state, and they backed it up with their dominant performances as they took the top three spots. However, the last spot for state was a narrow battle between North Atlanta, Centennial and Johns Creek. In the end, the Warriors came out on top, finishers Ethan Curnow and Andrew Churchill, narrowly edging out Cambridge, ultimately taking the fourth spot.

The team exploded with exhilaration and excitement when the meet official announced the Warriors had taken fourth place. The fulfilling feeling of achieving something you’ve worked so hard for so long filled the air. “It’s amazing that our hard work paid off and I’m really proud of everyone on the team,” said Ethan Curnow.

However, the season still isn’t over. North Atlanta now advances to the statewide meet in Carrollton. The Warriors will face off against the other 31 qualifying 6A teams in the state on Friday, November 1st. Despite the mass competition they’ll be facing, the Dubs are not backing down. Coaches Antonio McKay and Jerid Morisco, as well as varsity team captain Ismail Massar, the Warriors cross country team will be looking to recreate their stellar regional performance on the next stage.