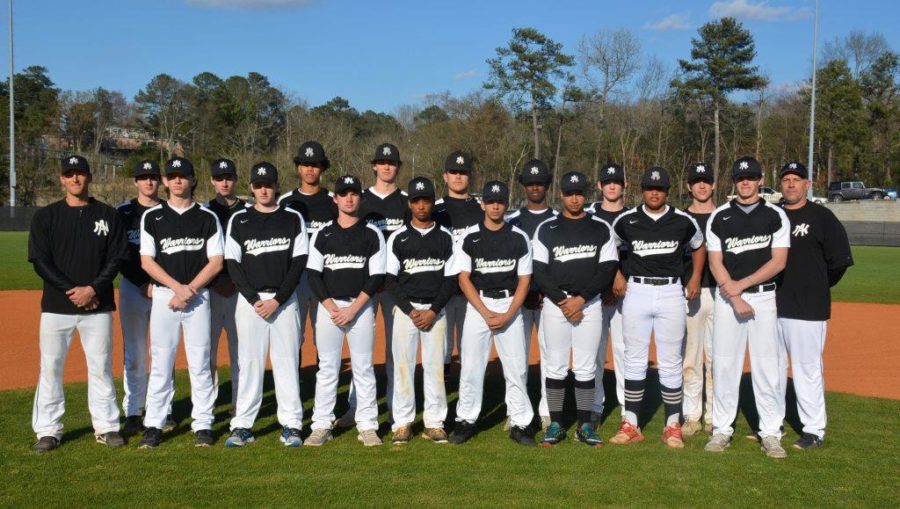 Diamond Days: The scrappy 2018 varsity Warrior baseball team fought hard all season long and managed to come up with five region wins in one of the state’s strongest regions.

It’s “Play Ball!” no more. On April 20, the Warrior baseball season came to its conclusion with a 4-to-3 home win over Alpharetta. With that win over the visiting Raiders, the team marked the end not only of its 2018 campaign but also the end-of-career milestones for this year’s team seniors.

The team wound up with a 10-17 overall record, coupled with a 5 and 11 record in tough region play. It was a campaign filled with its ups and downs, along with encouraging winning streaks and grim losing streaks. No matter what the team was encountering, players always fought hard until the very last pitch of every game. Although there was team-wide disappointment that the team did not reach its goal of making the playoffs, the team did meet the stated objective of hitting double digits in the win column. “We’re continuing to build and in this region it’s never going to be easy to just to dial up wins,” said first-year head Ricky Plante. “But I’m proud of the way we improved and that we never lost our fighting spirit.”

With the season’s late-February start the team got off to a tepid 1 and 3 record in its first four games. Then an early-season win against APS opponent Maynard Jackson made for a positive early-season redirection. Shortly on the heels of that high came a 15-to-2 drubbing at the hands of Mount Paran Christian. But the team rallied from early setbacks to and beat two Buckhead private schools, Holy Innocents’ and Westminster. Both of those teams won their own respective regions so the Warrior wins were indicative of team strength and resilience.

No matter how much strength the team could muster, there’s always the perennial challenge in playing in one of the most talent-rich regions in the Southeast. The Region 7-6A features powerhouses like Alpharetta, Cambridge and Pope. The team started off region play with a numbing 0-and-6 losing streak.  “It was certainly a tough patch, said junior infielder Marc Church. “And the hard part was that there were some games we probably could have won.”

In the face of adversity, the team yet again showed its interior strength and ultimately wound up notching five region wins. By season’s end, the team’s region record was five wins and eleven losses.

The team capped off the season with a spirit-lifting three-game win streak, and among these victories were mercy-rule wins over Tucker and Johns Creek. In the season’s last game against Alpharetta — the second-ranked team in the region — senior Isaac Mundy hit a walkoff single to secure the team’s 4-to-3 victory. “The way we finished the season was great and obviously the walk off is something I will always remember,” Mundy said.

Through this year’s campaign, there were issues a-plenty for the varsity baseball team, everything from adjusting to a new coach, recovering from a slow start, and the annual challenge of playing a murderer’s row of potent region opponents.

But no matter the challenges, the Warrior “boys of spring” never stopped fighting and never stopped working for each other. A combination of senior leadership, stellar play and the usual Warrior pluck meant the 2018 season will be remembered as a positive one for North Atlanta baseball players and their fans.