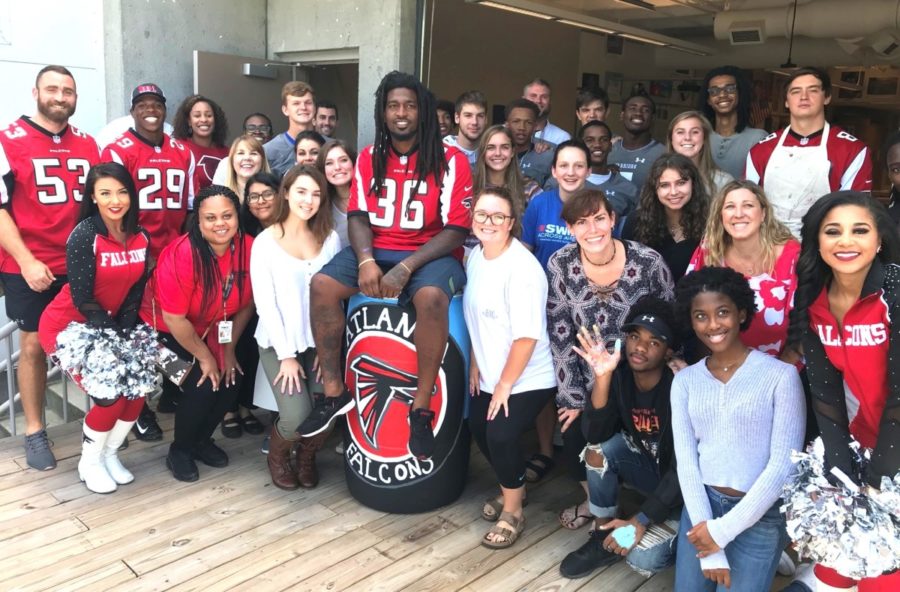 It was a noteworthy day at North Atlanta. On October 2nd, one by one, students from both athletic and art backgrounds were called down to the school’s atrium. All who were called were a little puzzled as to why they were pulled out of class, but they were ready to participate in whatever was in store. As they sat patiently in the art room on the fourth floor, they were greeted by a collection of art teachers and administrators who explained that they were soon going to be forming a North Atlanta Student Athlete Art Leadership Team, or SAALT. Little did the students know, the Falcons program, Hometown Huddle, set up a fun surprise for the debut of the new club. A group of professional football players and cheerleaders from the Atlanta Falcons were hid out in the closet, ready to surprise the hardworking students.

For Atlanta’s own NFL team, Hometown Huddle is about more than just football. It’s a day for giving back to the Falcon’s family across 11 different locations throughout Atlanta. The Dirty Birds send out their athletes to a visit a variety of places from hospitals to elementary schools to the city’s most famous 11-story high school. After reaching out to APS, they knew there was no one better for the players to surprise then the North Atlanta Warriors. “The students reacted exactly how I expected,” said art instructor Kimberly Landers. “When the Falcons players actually walked out of the closet, their jaws just dropped.”

Outside linebacker Kemal Ishmael and punter Matt Bosher were just a few of the special guests that were welcomed by the artists and athletes at NAHS. The SAALT program and Falcon’s athletes were able to enjoy their time together printmaking, chatting, and creating impressive Falcon’s-themed artwork. “The great thing about art is that you don’t have to be good at it to make something beautiful and that what’s really important.” said junior Lily Mason.

The Dirty Birds helped establish a game plan for the up-and-coming SAALT Program at North Atlanta this school season. Hometown Huddle’s work with NAHS has helped lay some preliminary groundwork for the new program to bring athletes and artists together for the better of North Atlanta High School. Sounds like a winning game plan.