When Warriors Get Knocked Down They Get Right Back Up Again 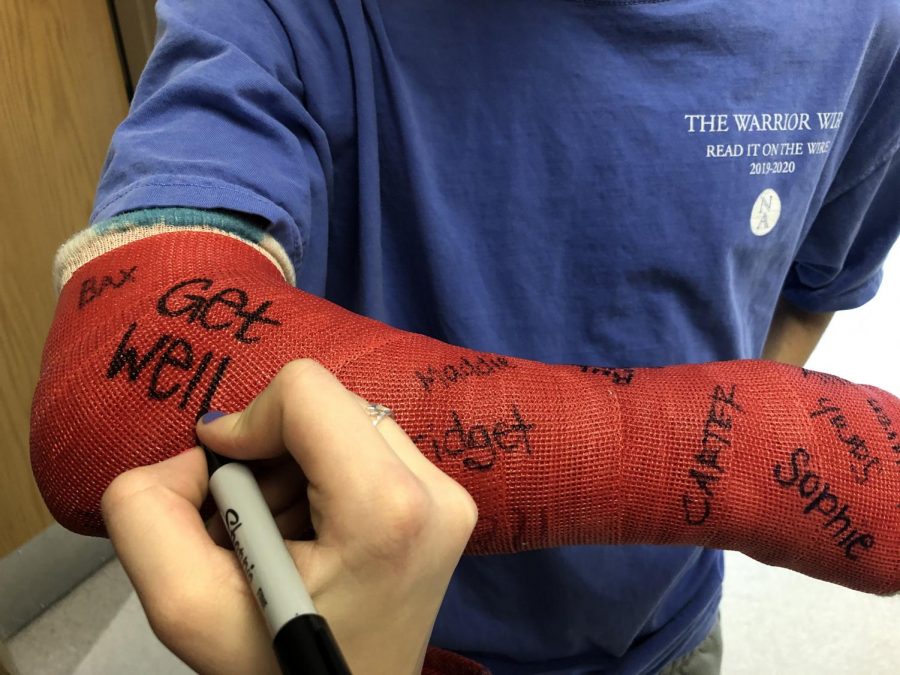 Broken Bones: Many NAHS students are recovering from injuries.

Amidst the holiday cheer and celebration, many North Atlanta students have not been quite so jolly. It seems that a majority of students have developed sustained injuries of differing varieties. Concussions and knee surgeries have left our Warriors crutching down the halls and missing school days. Whether it’s from playing a sport, hanging out with friends, or just being the clumsiness, the injuries stink and can really put a damper on the holiday mood.

A concussion is best understood as a bruise on the brain when the head is hit against the skull. A doctor prescribes rest without screen time, little to no physical movement, and lots of sleep so your brain can heal. Junior Tyler Hankin was with friends when someone accidentally opened the car door and his head happened to be in the pathway, giving him a cut on the head and a week off from school. “It was frustrating because every time I tried to think it just gave me a headache,” he said, “but being away from school for so long was boring, I had nothing to do.”

In the middle of November junior Lucy-Grey Shields underwent knee surgery after dislocating her left knee a total of seven times in four months. The first time she dislocated her knee she was in the National World War II Museum in Louisiana, she face planted and blacked-out, instead of going to the hospital she insisted she was fine. After the fifth time, she realized that she was going to need physical therapy, and it wasn’t until after the final dislocation that the Orthopaedic told her she was going to need surgery. She came back to school in a wheelchair and is on crutches now. There are many issues that came with the injury, inside and outside of North Atlanta. “No one would let me on the elevators when I was injured!” Shields said. “I had to leave class a few minutes early, just to catch one.”

Junior Sarah Huger plays goalie for an academy soccer team, and in the last game of the season, she tore ligaments in her foot, and possibly injured her hand, as it is the size of a watermelon. Huger was going to make a diving save for her team and when landed funny, hurt herself. She played the rest of the game to be there for her team, but immediately after it happened she knew something wasn’t right. Hers is yet another addition to our wounded warriors.

So over winter break, have fun and celebrate, but make sure you’re being careful. And most importantly, keep in mind your injured friends who may need some extra love this holiday season.