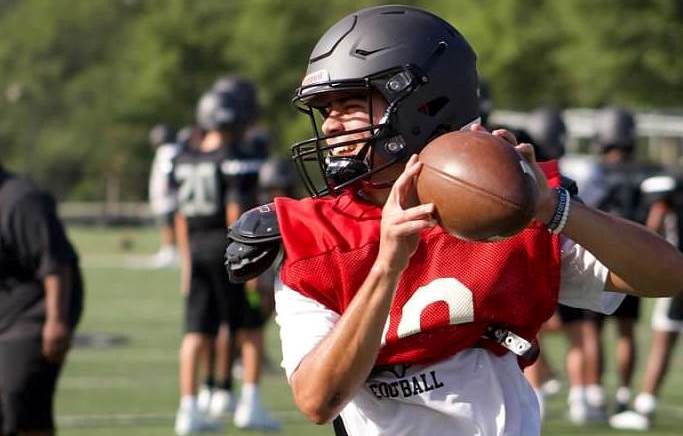 For The Dubs: All season long, senior quarterback Jack O’Kelley and his teammates will be tested by a new region schedule and by pandemic-related challenges. O’Kelly is one of several standouts expected to lead the Warriors during their 2020 gridiron campaign.

North Atlanta football changed quite a bit this past offseason. Beyond the uncertainties associated with how to even pull off a gridiron campaign in the COVID-19 era, the Warriors experienced key losses from last year’s playoff team that thrilled players, coaches and fans alike. Among those key losses were running back T.K. Mack, quarterback Wiley Hartley, and lineman Wesley Horton, and head coach Sean O’Sullivan left the program for Centennial High School. In more big news, the Warriors promoted offensive coordinator James Aull to head coach to lead North Atlanta’s 2020 campaign. This team has a new face, and will be counting on these five seniors to lead the Dubs back to the playoffs in 2020.

Jack O’Kelley, Quarterback: Lining up behind center for NAHS will be senior Jack O’Kelley. O’Kelley has spent the last few years backing up former QB Wiley Hartley and filling in when needed. A gifted athlete, the Warriors employed a few packages last season with O’Kelley split out wide or in the slot. This season, O’Kelley is trading in his role as a positionless playmaker to become the Warriors’ leader on offense, and his electric running talent looks to add another dimension to that side of the ball.

Ned Coleman, Linebacker / Tight End: Coleman returns to North Atlanta as the team’s most prominent two-way player. He is a starter at linebacker and tight end. This season, he will look to be a hulking presence on defense, building off of 2019 where he made 36 tackles and 4 for losses. On offense, he will be asked to protect the quarterback and open up holes in the run game, as well as help out in the passing game as a receiving option. Coleman’s plate is very full and he will be a key piece of the team as a senior.

Armari Hodges, Linebacker: The Warriors are looking to linebacker Armari Hodges to anchor the front seven this season. Hodges is coming off of a very solid 2019 where he made 49 tackles, including 5 tackles for losses. This season, North Atlanta is counting on Hodges to be a tackling machine up front, and to lead the linebacking corps. A great deal of the Warriors’ defensive success this year will depend on his play.

Tre’ Mason, Slotback: A shifty playmaker, senior Tre’ Mason returns as the Warriors’ go-to big play threat on offense. Last year, Mason took over in the second half of the season to become Wiley Hartley’s favorite target in the slot. This offseason, Mason has started to see more reps out of the backfield as both a runner and pass-catcher. North Atlanta will likely try to move him around the field to create favorable matchups and look for those big play opportunities that he provides.

Syre Stewart, Defensive Back: The new leader of the North Atlanta secondary, defensive back Syre Stewart is looking to have a breakout 2020 campaign as a senior. The son of former Pittsburgh Steelers quarterback (and Warriors QB coach) Kordell “Slash” Stewart, Syre returns from a strong 2019 which saw him make 30 tackles, a sack, and a fumble recovery. This year, he will be asked to take on a much bigger role in the defense, as North Atlanta’s most experienced returning DB. Look for Stewart to be the Warriors’ X-Factor in the defensive backfield for 2020.

An outbreak of COVID-19 has put the Warriors’ season on pause and created a lot of uncertainty about what the 2020 season will look like. Yet if and when the Dubs do take the field, these five players will be leading the charge at North Atlanta.