Kid Cudi’s Man on the Moon 3: The Chosen is Met with Positive Reception 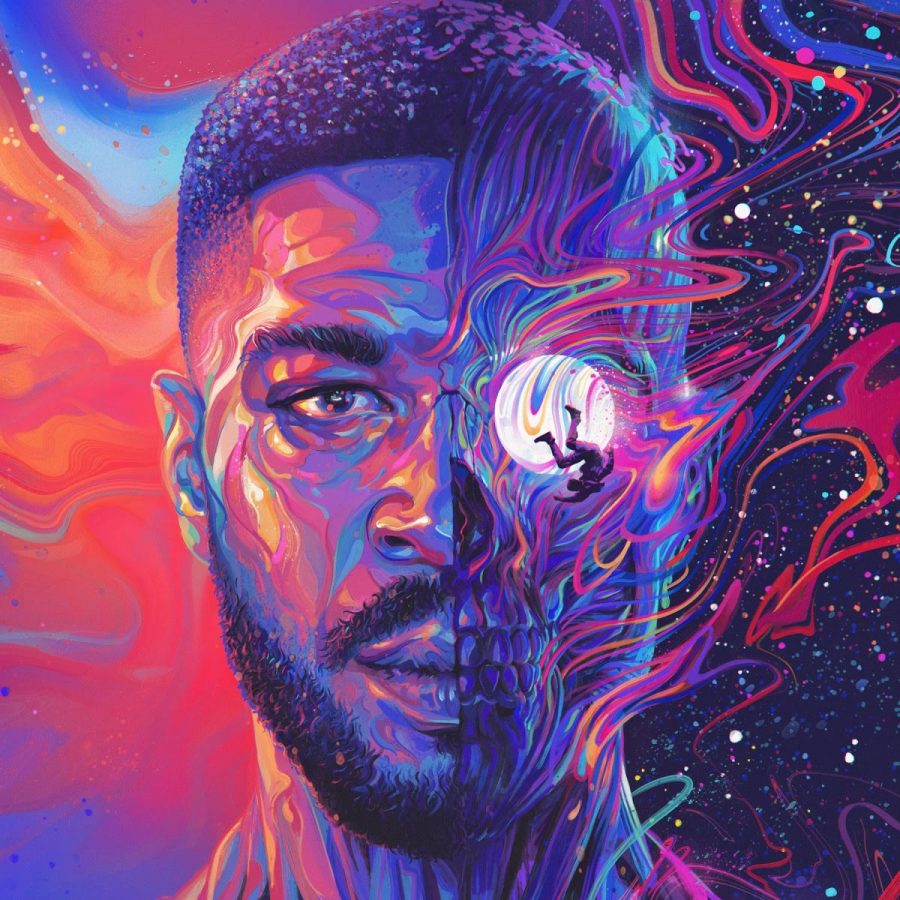 Man on the Moon: The third and final installation to Kid Cudi's MOTM series is a powerhouse of emotions.

Does Man on the Moon ring a bell? Some may be thinking of deceased astronaut Neil Armstrong, but those in tune with rap and pop culture know this refers to Kid Cudi’s well revered album series Man on the Moon. The first two albums were released over a decade ago, and just as the thought of a return seemed otherworldly, Cudi began to hint at the album’s return. The third and final part of this trilogy was released on December 11th, with many exciting collaborations and installments.

The album features well-known artists such as Trippie Redd, and a posthumous verse from Pop Smoke, as well as indie artist Phoebe Bridgers. The album is structured into four acts, much like the previous ones in this series. Titled — respectively — Return 2 Madness, The Rager and The Menace, Heart of Rose Gold, and Powers, the acts deliver various styles and ideas that represent Cudi’s war with his emotions, such as depressive moods, but also with the happiness he strives to feel each day.

Beginning with “Beautiful Trip,” this intro provides a swift transition to “Tequila Shots,” an introspective track that focuses on the issues plaguing Cudi’s mind, yet also the growth he’s experienced as a person. “Another Day” and “The Void” are other songs on the album describing mental health struggles, wherein the latter Cudi raps, “I will fall in the void, fall in the void just to avoid anything that can bring me down…” While “the void” may give off a somber vibe, it may also be a safe space for him that fuels his creativity to continue making music.

A parallel to “The Void” and the positive state of mind he experiences at daytime, “She Knows This” deals with his party-animal nature by night and the Mr. Rager side of Cudi. This is the second-to-last song of Act I, and prepares us for an even deeper fall into darkness, ending with the rapper singing “Gettin’, gettin’, gettin’ crazy,” as we plunge into “Dive,” a song that further encompasses partying and recounts substance abuse. Act II: The Menace commences with “Damaged” as Cudi raps about his loss of control from his touring and partying endeavors, causing him to spiral. Despite the main theme of loss of self, this act presents the world with a legendary collaboration between Pop Smoke and Skepta in “Show Out,” displaying a distinct UK drill beat that demonstrates Cudi’s versatility both vocally and within this musical genre.

The upbeat style of the hip-hop track contrasts with the next song, “Mr. Solo Dolo III.” This third track serves to address Cudi’s battle with mental health and addiction, once again placing the album in a depressive mood along with “Elsie’s Baby Boy,” where he sings about life with his single mother and the death of his father. As a child, he tried to repress his emotions, but now Cudi is one of the most open artists about his struggles.

Love is a big subject in Act III, with tracks “Sept. 16,” — a song mainly about Cudi’s girlfriend, titled after her birth date — and “Lovin’ Me,” a sensational track with indie artist Phoebe Bridgers that delves into the importance of self love, joining in the chorus to sing, “I told myself I cannot grow without lovin’ me, lovin’ me,” to show that they’ve had problems with expressing love to themselves, delivering a great end to the third act, Heart of Rose Gold.

Act IV’s biggest theme is happiness and moving forward, as “The Pale Moonlight,” “Rockstar Knights,” and “4 Da Kidz” set the spotlight on positivity. As the album nears the last song, Cudi takes the time to tell his fans that they’re not alone. “Stars in the sky, they will light your way through / Feelin’ alone, just know you are not…” he sings as a reminder that there’s always light at the end of the tunnel. The album closes with “Lord I Know” and brings an end to the MOTM trilogy, with Cudi contemplating the highs and lows he’s faced, and shows that he’s content with life thus far.

Cudi’s heaven-like album puts the listener through a journey of the demons that torment him and the saving graces that have brought him peace, yet the end of this well-known era does not signify the end of one of hip-hop’s biggest successes, Kid Cudi.