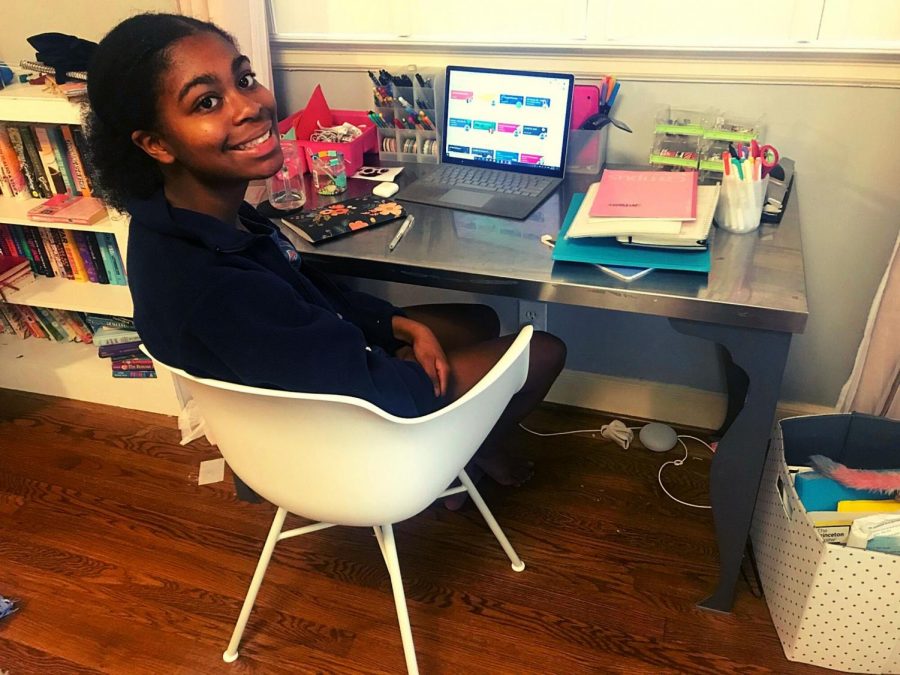 Pandemic Perils: Like all other 2,100 North Atlanta students, sophomore Lena Hoover has had to completely redo her own notions of what school means during the pandemic-impacted 2020-21 school year.

Everyone has a dream. For example, some people have the lifelong goal of becoming a world-famous athlete. Others want nothing more than to attend Harvard University. But in recent months, the dreams of many — especially those who attend North Atlanta High School — have centered on getting beyond the global pandemic related to the lethal COVID-19 virus.

Sophomore Lena Hoover, a dedicated student and a player on the girls JV soccer team, is no exception to those with abiding “COVID Dreams” along with the attendant deep desire for a return to normality. Over the past few months, one of her biggest dreams has been to escape the mind-numbing tedium of online school. In this, Hoover echoes the hopes and dreams of millions of other students similarly deprived of a normal and healthy school environment.

According to Hoover, learning through virtual school for so long has changed her as a person. Ordinary school, while often stressful and exhausting, at least provided students with the opportunity to fraternize with other teenagers. Online school has robbed students of that integral experience and it’s taken just as heavy a toll on Hoover as it has on her peers. The damage done is much more serious than one would suspect. She said her ability to socialize has been significantly diminished. “I was introverted even before the pandemic started but now I’m basically a recluse,” she said. “I never realized just how much I depend on school for social interaction.”

In the same vein, Hoover believes that the pandemic has reduced her sense of discipline and self-control. Most notably, procrastination has become an increasingly bad habit. She admitted that assignments that she would previously have done days before they were due are now being completed with mere minutes to spare. The main reason for this is that virtual school has made it 10 times easier to avoid doing assignments in class and then work on these assignments is delayed until that work can be delayed no more. In sharp contrast, Hoover said, she was much more organized during in-person school. She also said she benefitted from teacher monitoring and those adult voices that reminded her not to slack off. “The hardest part of virtual school has been paying attention in class,” she said. “Even when I know I need to focus my mind on what’s going on in class, it’s so hard to resist the temptation to just go on my phone when I get bored. I keep procrastinating my schoolwork for later instead of just doing them when the teachers give us time in class.”

Hoover concedes that the pandemic isn’t all bad. For example, she has been getting more sleep as a direct result of online school. In addition, there’s a certain comfort to be found in conducting day-to-day activities in the comfort of one’s own home. “I like the fact that I can sleep in much later now,” she said. “Plus, my desk chair is a lot more comfortable than the classroom chairs at school are. But I’d still rather be at school in person.”

Ultimately, Hoover just wants to return to how life was before the pandemic. Among other things, she misses her friends, her clubs, and the structure that normal school gave her life. “I hope for the pandemic to be over by summer,” she said. “For me — and probably lots of other students too — a pandemic-free summer would be the ultimate dream come true.”

And in these uncertain times, these vivid dreams are the ones everyone is hoping for.