The Warrior Wire • May 10, 2021 • https://www.thewarriorwire.org/8759/sports/history-making-soccer-warriors-reach-playoffs-final-four/ 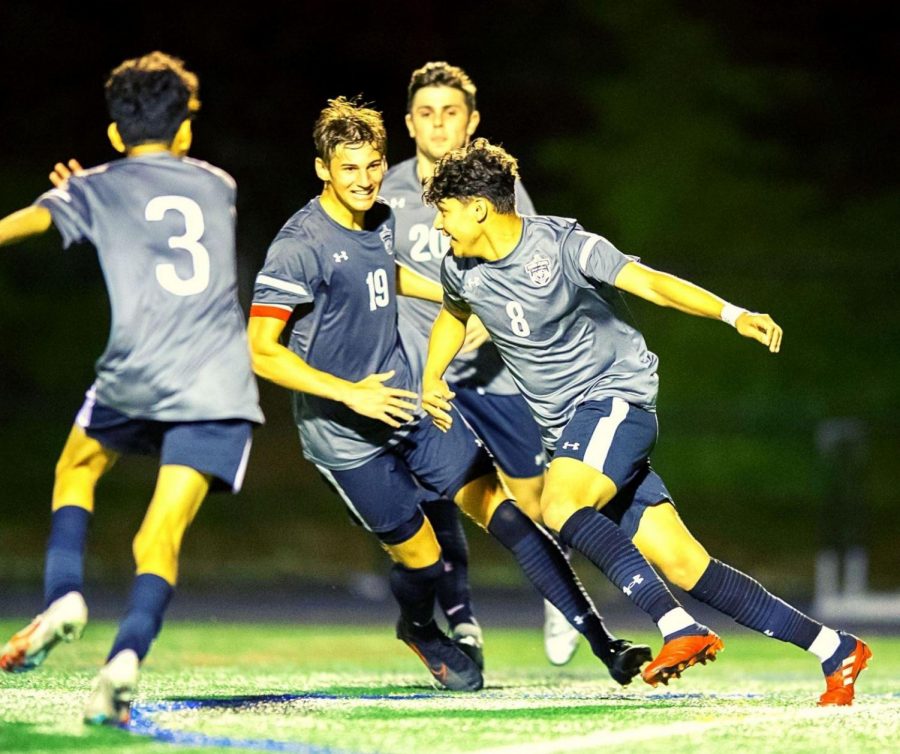 Golden Goal: Dubs striker Jordan Chavez scored the winning goal in overtime on May 5 against Allatoona, a magical moment that secured North Atlanta’s arrival in the state playoff Final Four.

“Historic” is one word that can be used to describe the current playoff run of the North Atlanta Warriors boys soccer team. After three successful playoff rounds, for the first time ever, a North Atlanta soccer team is in the Final Four of the state playoffs. The boys team – having what is inarguably its greatest season ever — punched its way into school athletics history with a thrilling 1 to 0 overtime win on May 5 over the visiting Allatoona High Buccaneers.

The quarterfinal playoff game was marked by plenty of tense moments and near goals for both squads. With things all knotted up at the end of regulation time, matters went into overtime. And then the usual brand of clutch dramatics – a quality for which the spirited Dubs team is known – repeated itself. Warrior striker Jordan Chavez capitalized on a goalie-and-defender collision and was able to scissor-kick a loose ball into the back of the net. The North Atlanta sideline erupted with elation and the team doggedly managed to hold on to its lead for the victory. “It was definitely one of the bigger soccer nights of my life,” said senior team captain Daniel Gardner, a senior midfielder and first team all-region player. “All season long we’ve asked ourselves: “How far can we take this?” I guess this season we’re trying to find that out.”

For the semifinals, the Dubs will play Johns Creek on Tuesday, May 11 at Grady Stadium at 7 p.m. The match up features two region champions and two playoff number one seeds. But for the game, the North Atlanta Dubs can likely be described as David against the perennially strong Johns Creek Goliath. The Gladiators rolled up a 15-2-1 record during the 2021 season and had an undefeated record in region play. “The longer we go, the more we have our work cut for us and we’ve known this all along,” said junior team captain Ryan Soyah, a junior centerback and also a first team all-region player. “This is the kind of opponent where we’re going to have to really play our best soccer.”

The Dubs have continued to stay focused all week during practices. Directly in the face of widespread interest and widespread pressure being directed toward the team, they continue to be drilled in and ready for

Tuesday’s game which is sure to be a battle. Johns Creek is expected to bring a lot of fans down to the city from the northern suburbs. Not to be undone, however, student body leaders say they’re doing their part to ensure the Dubs student section is rocking. The school’s senior class is now out of school and there’s a sense the group may treat the semifinal match like the football games they never were able to attend in the fall. “We really hope that anyone who can make it to the game comes to support the team,” said junior fullback Henry Sullivan. “This game is probably one of the biggest in program history and we hope that will be reflected by the energy that our student section can bring.”

That energy could be critical for the Dubs to be able continue what many have been calling a Cinderella season for the team. The home team will need the support of the entire Warrior family as it looks to extend its historic playoff all the way to the state championship finals. In a season — and a school year — that’s seen many ups and downs, we can all be assured that all of North Atlanta will be following the team’s sustaining motto for the season: “The Spirit Never Dies.”