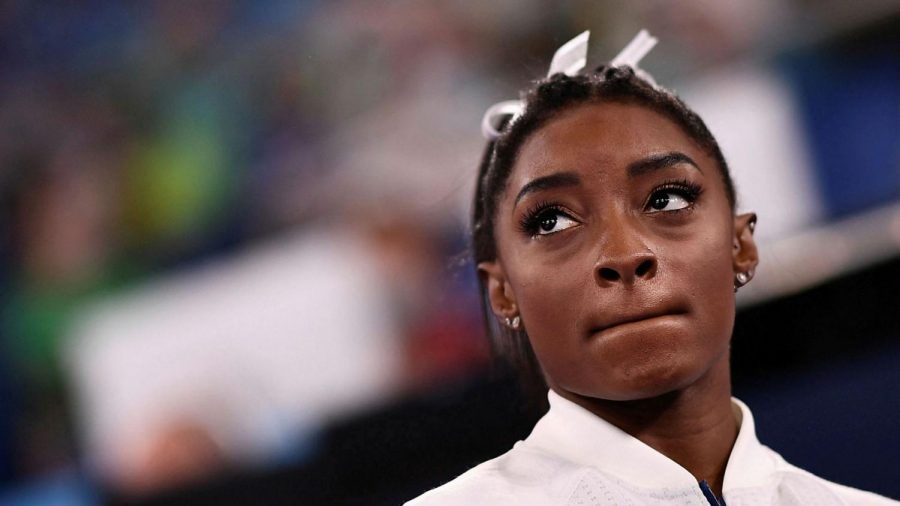 Let's talk about it: The talk about mental health is now as important that ever. Pictured above is US Gymnastics star Simone Biles, who recently opened up about her struggles with mental health.

Eat, Sleep, Practice, School. Most athletes know this routine all too well. During the season, life becomes chaotic, especially for upperclassmen struggling to keep up with the intense classwork given to them. Even without the added stress of school, a lot of athletes have clubs, jobs, and chores that take up time in their day as well. There are only so many hours in a day, and the clock of productivity is constantly ticking. It feels like student athletes can never catch a break, no matter what.

According to Nationwide’s Children Hospital, teenagers get between 7 and 7 and a half hours of sleep, while teenagers’ recommended amount of sleep is 8 to 10 hours. Athletes get even less sleep than the average teen because of practice. Many North Atlanta athletes stress that they feel they are sinking under the pressure that comes along with both practice and school. One athlete who feels like the pressure is ruining her enjoyment of her sport is Caroline Clippinger. Clippinger is currently a junior at North Atlanta in the IB Program and plays basketball for the school. While she does understand the good that comes out of playing a sport, she feels it is like another course for her to take. “I feel tired and stressed and also anxious a lot of the time,” Clippinger said.

Though many people express feelings of stress during the season, others say their mental health gets better while playing. Physical activity is a great stress-reducer for many because of the added benefit of being able to zone out. Freshman Cam Shapiro, a cross country runner, tends to agree with this. “I feel exhausted from having practices and school every day,” Shapiro says, “But I definitely feel more physically in shape.”

Conversations about Mental Health in sports have always been a huge taboo topic for the general public. Ignoring those struggling is much easier for them than lending a hand. When people DO publicly struggle, they are relentlessly mocked by online critics. Such is the case with Simone Biles. Over the summer, Biles withdrew from the final of the Olympics games to focus on herself. Mixed opinions came out regarding her choices. Some judged her for not being able to handle the pressure while others publicly supported her and called for a greater discussion around mental health. Among them was Sophomore Kayleigh Fleming, a soccer player at North Atlanta. Fleming recalls a similar circumstance that occurred, where she had to leave a game due to a heat stroke. “I didn’t want to get off the field,” Fleming said. “I felt like I was letting my team down by leaving.”

In previous years, the conversation around mental health has been written off as unimportant. Now, more people are willing to talk about how the added stresses and pressures by sports can negatively affect their health. Hopefully, with the example shown by Simone Biles, more people will be inclined to take a break to reduce their own stress. Here’s to hoping that this generation’s discussions surrounding mental health will help future generations and future student athletes.