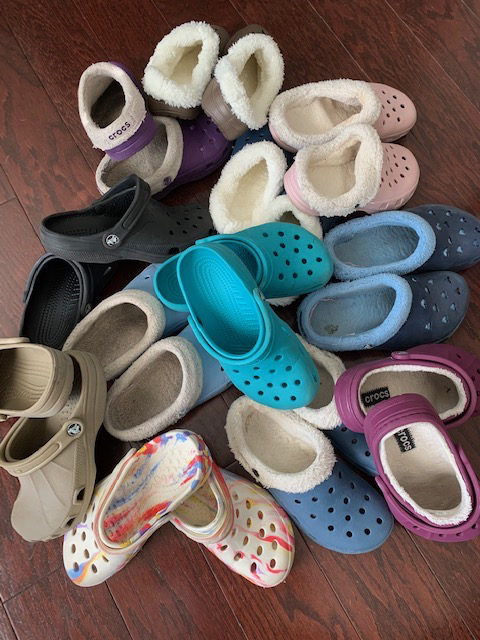 Croc Craze: These rubber shoes scattered with holes can be seen throughout the halls at North Atlanta.

A fad is defined as a widely shared, short-lived craze, often without rhyme or reason behind its sudden popularity. A conundrum of the word can be found in the squeaky rubber shoe, Crocs. The footwear seems to define the term and defy its laws all at once. Although checking the “temporary” and “widely popular” boxes, the shoe has managed to become—although an oxymoron—a recurrent fad.
The sandals have become quite a polarizing subject. No one seems to be neutral on the topic, with opinions on polarizing sides of the spectrum. On one hand, there are Croc enthusiasts who will claim the fad as a fashion, collectors of all styles, colors, and jibbitz. AP Language and Composition teacher Deanna Hasty stands firmly in the pro-Croc camp. She has been sporting the shoe since the beginning and doesn’t plan to stop anytime soon. “Crocs are great for when you hate your shoes, they are fantastic for work because they are so comfortable,” said Hasty. “They’re not really shoes but they’re not really flip flops so they’re perfect for any occasion!”
Hasty’s fascination started at a restaurant job where all the cook staff wore them and she quickly fell in love. Hasty owns a whopping 13 pairs of Crocs. Her favorite are a fur-lined purple pair. The collection also entails colors such as pink, blue, black, rainbow, and even a mickey mouse set! However, she has not yet invested in jibbitz because they did not exist when she first discovered the shoe. In contrast, junior Liza Fagin is a jibbitz lover. Fagin owns a pair of blue crocs and a large collection of jibbitz. She switches them out often and even trades with friends. “Crocs are so much fun! I like switching out my jibbitz based on how I feel and my current interests,” said Fagin. “Looking at someone’s shoes is a great way to get to know them!”
On the other hand lies the anti-Croc camp. Junior Micah Povlot is a proud Croc hater. Povlot finds the shoe extremely unfashionable and uncomfortable. He notes their tendency to fall off at any given moment and his inability to find a pair that fit just right. To most, the bright colors and rubber exterior are acutely off-putting. “I fell trap to the croc fad in elementary school. As soon as I put my first (and only) pair on the haze wore off and I instantly realized how ugly they were. I felt pranked by society,” said Povlot.
So why does the Croc trend keep returning? Crocs reached their first peak in popularity whilst Gen-Z was in elementary school. Almost every second grader could be found with a pair of red Lightning McQueen Crocs. A lot of trends from our childhood are being recycled right now, and nostalgia is running high. Although ugly, they remind the owner of the sense of childlike wonder sported in their first pair. Whether you love them or hate them, you can’t deny their long lasting popularity.