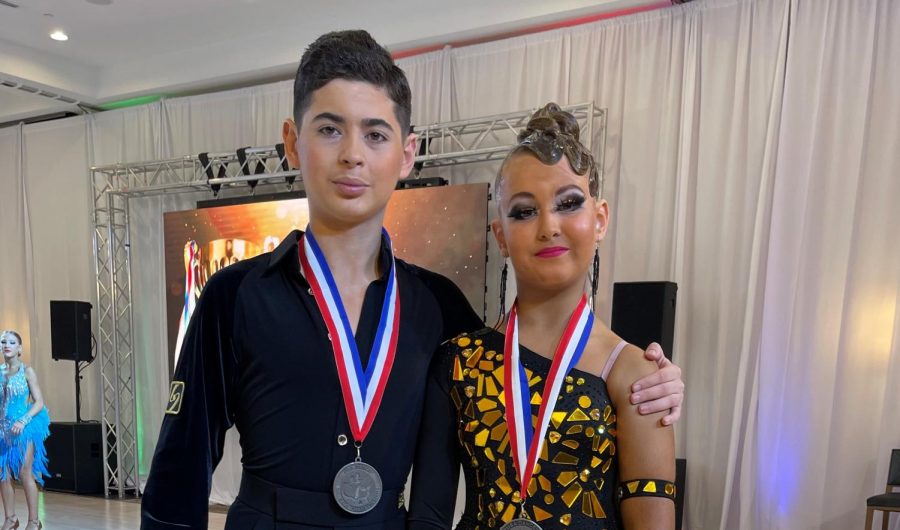 Dancing Dubs: Yakov Vinnik, a sophomore, has won the prestigious National Champion of the United States title for ballroom dancing.

Slip into your dancing attire and get into position, it’s time to hit the ballroom. Well, it is for sophomore Yakov Vinnik at least. This admirable Dub is an avid ballroom dancer and he recently took home the impressive title of National Champion of the United States in the Youth Division for Standard Ballroom dances. This is certainly a very unique and remarkable hobby, taking Vinnik a considerable amount of hard work and dedication to get to where he is today.

Vinnik began ballet at the Joffrey Chicago Ballet academy at the young age of three and he participated in ballet until around the age of eight. It was not until after moving to Atlanta that he began ballroom dancing at the age of 11 and he has continued with it ever since. Although his dad was the person who really pushed him to start dancing and keep up with it, Vinnik doesn’t seem to be opposed. “I guess there are worse things to do, my parents must have figured,” said Vinnik. “They definitely would not have said yes to skydiving. And anyways, I ended up being very happy with it.”

While dancing is typically a lot of fun for Vinnik, it also takes a large amount of hard work. It took a lot of training to get to where he is as a dancer and to win his championship. He spends around 14 hours a week training and going to dance practice, and that includes a regimen of Tuesdays and Thursdays from 5:30-9 p.m and Sundays from 11 a.m to 5 p.m. It could be said that the talented young man practically lives at Volga Dance Studio. When asked about what it takes to get to where he is today he did not hesitate in giving an honest response. “With dancing, there is training, execution, pain, pain – and a lot more pain,” Vinnik said.

Although ballroom dancing comes with a lot of work, it appears to have paid off. Vinnik won Nationals for “Amateur Youth Novice Academy” in the competition he danced in with his partner Victoria back in early-October. He won the standard category which includes dances such as waltz, foxtrot and quickstep. This seems like it would be such a memorable and thrilling experience and Vinnik does not disagree. “Competitions are always very exciting and my favorite part about it is that when you get on a dance floor there’s a certain sense of adrenaline that hits that is so exhilarating,” he said.

The news of his dancing exploits is something that Vinnik’s peers – as they sit behind him in a math or science class – are not fully aware of. His teachers upon learning of his ballroom dancing excellence are nothing short of impressed. “He doesn’t exactly have to show much rhythm in the context of my classroom,” said Casey Christenson, who teaches Vinnick in his literature class. “But in my mind what he’s able to do with performances makes him all the more impressive.”

Noteworthy Dubs never fail to impress and Vinnik certainly falls nothing short of that. If you happen to spot this Dancing Dub somewhere around school don’t hesitate to congratulate him and thank him for bringing some dancing elegance to our school.