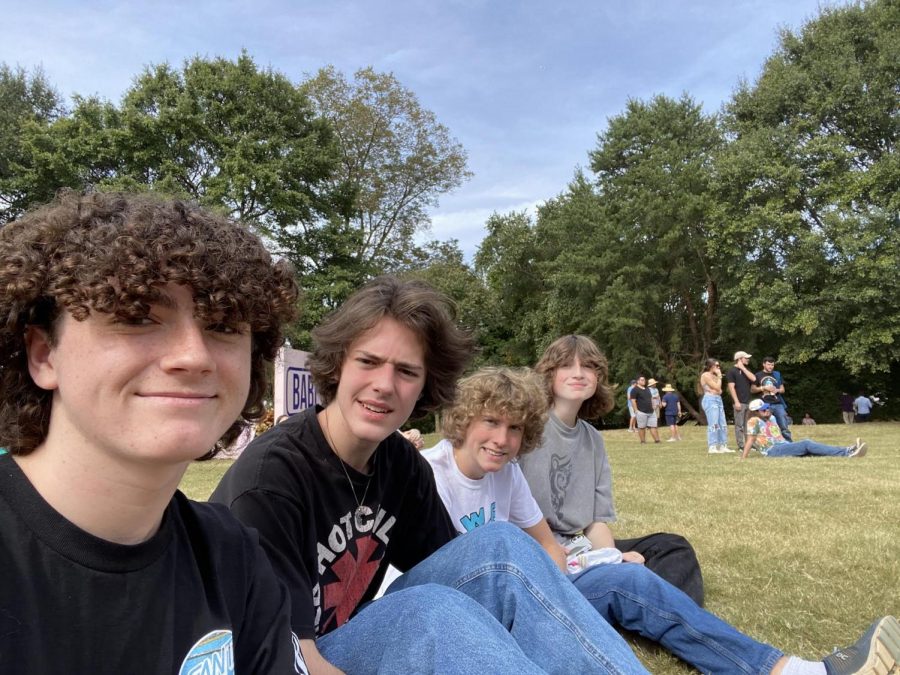 Dubs Living it Up: Juniors Dennis Young, Dominic Fanelli, Roman Hoeflich, and Wyly Wickland were among the many North Atlanta students who enjoyed their experience at the Shaky Knees festival.

After the craziness of Music Midtown, music came back in full swing with the Shaky Knees festival in late October. The more alternative scene of Shaky Knees drew a different crowd than Music Midtown. The flock of people at the more recent festival included some of North Atlanta’s own students as they experienced Shaky Knees for the first time in two years.

Friday started off strong with St. Vincent, Mac Demarco, and the highly anticipated Foo Fighters. The American rock band is well regarded, with the origin of the Foo Fighters dating back to 1994 where Dave Grohl founded it after the breakup of Nirvana. Sophomore Joseph Varie said, “The Foo Fighters were my favorite of the whole festival. I’ve loved their music for so long, and it was awesome to see them in person.”

The next day was headlined by Run the Jewels and Alice Cooper, who amazingly at his old age of 73 is still performing. With a raspy voice and a career spanning over 50 years, Cooper is still making a strong impression. “Alice Cooper was just surreal. He went into theatrics on stage and made it feel like a stadium concert, not a concert in a park,” said junior Red Mason.

Around North Atlanta, the most popular day to represent NAHS seemed like Sunday. Sunday’s choice of artist for North Atlanta was Phoebe Bridgers, who was nominated for four Grammy Awards in 2020. “Her music is just something I enjoyed more than any other artist,” junior Emily Creavans said. “The experience was bolstered by the amount of friends I had at the show who shared the same love for Bridgers’ music as I do.”

The general consensus for Shaky Knees was that it was a much better environment to enjoy the experience of the music and people compared to Music Midtown. Though both have their fair share of problems, the students of North Atlanta that have experienced both have agreed that Shaky Knees is just a kinder experience. People are nicer, and they even have a section for people with disabilities to sit down and enjoy the show with everyone else. Shaky Knees is a wonderful experience for the people of Atlanta that most will enjoy. The more alternative music festival is still happening even during the raging pandemic, and it will continue to happen as it is scheduled to return in late April to early May of 2022. Popular among the Dubs, anyone who goes will see some familiar faces that they recognize from school.