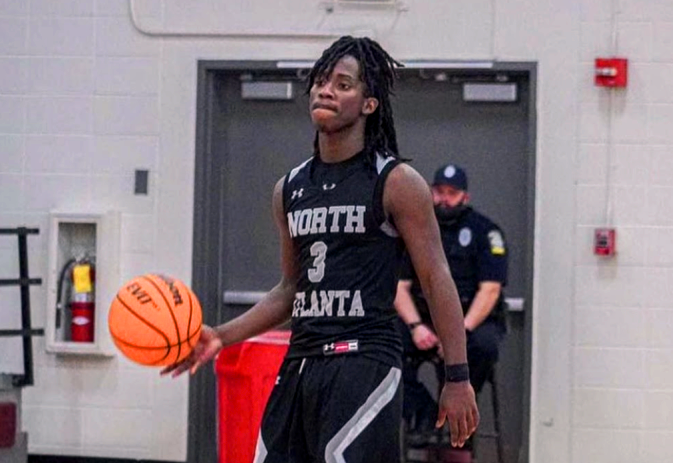 Meet Warrior hoops star Khamani Olivacce, a gritty senior guard who is eager to get better everyday. As a Senior on a young and inexperienced Dubs’ team, Olivacce has embraced his increased workload this season, helping to propel the Dubs to early season success. Throughout his high school career Olivacce has established himself as an outstanding facilitator who gets his teammates involved first. However, with elevated expectations, Olivacce has been asked to become more of a scorer and vocal leader of the team. Olivacce has not backed down from the heftier expectations. Off to a 7-3 start, Olivacce and his stellar play have played a major impact.

Ball has been life for the Dubs’ floor general for the majority of his life. Olivacce began playing basketball at the age of five, and has not looked back since. Originally from the Virgin Islands, he played a plethora of recreational tournaments there, but did not play much organized basketball outside of that. It was in his 8th grade year when he moved to the United States, and he was flooded with an abundance of opportunities to better pursue his passion.

Arriving at North Atlanta as a freshman, he was able to make his presence known on the court right away. Within just a year, he had earned a spot on the varsity team. Olivacce attributes such success to his habits as a gym rat. He says he does not go out very often, and looks to professional basketball players for inspiration on the court. “My favorite player is LeBron James, and my favorite guard is Kyrie Irving. I model my work ethic after them, but I model my game after rookie guard Davion Mitchell. I love Mitchell’s stellar defense and switch of speed,” Olivacce said.

This year, Olivacce and co-star TJ Lewis are the only experienced varsity players on the team, meaning he now plays a role never taken on before in his career. Boasting an impressive 13 points and 9.8 assists per game average, it is clear that he has embraced his increased scoring responsibilities while also maintaining his unselfish and teammate first mentality. Olivacce’s biggest showing of the season was when he dropped a whopping 27 points, 8 assists, and 6 rebounds during the season opener against the Dubs’ rival Midtown High School (formerly known as Grady). Not only was Olivacce able to have such an impressive statline, but he was able to lead the Dubs to a tough fought victory without Dubs’ starters Jalen Lane and TJ Lewis. Olivacce felt like those trying early circumstances were beneficial for the team’s chemistry and his development as a more aggressive offensive threat. His teammate TJ Lewis has been delighted by Olivacce’s contributions. Lewis said, “Khamani has been a great floor general for us, while also being just a great all around teammate who keeps us going.”

With a current 7-3 record through their first 10 games, sky appears to be the limit for Olivacce and the young Dubs team. Starters Jalen Lane and TJ Lewis have returned back to action, and the team is as healthy as they have ever been since the season has begun. With Olivacce handling the rock and a healthy Dubs team beside him, the future of Dubs’ Basketball looks to be very bright.